September 05, 2017
Kittery Point and Pepperell Cove
Our official first stop in Maine. After a wet and windy arrival, we awake to a beautiful morning.  Blue skies above and a gauzy haze covers the land and seascape.  Two lighthouses guard the entrance to the harbor and rocky ledges mark the shores.  We are on the edge of a mooring field filled with sailboats and small fishing boats.  Lobster buoys are scattered all around us.  Weathered New England cottages dot the shore.  Lobster boats are tied up at their docks and lobster pots are stacked in their yards.  We decide to put the dinghy in the water and do some exploring.
Kittery and Pepperell Cove are a working harbor.  As we set out in the dinghy we notice two lobstermen tending the pots closest to Bravo.  We motor over and ask if they are willing to sell two lobsters.  Score!!!  $15.00 for two super fresh lobster with the largest claws ever!  We find a bucket, fill it with salt water and top it off with a bag of ice.  Have to keep the lobster happy until dinner time.  We head to the town dinghy dock and walk up the hill to the small grocery store.  Unfortunately, it is closed and under renovation, and is also the only store in town. 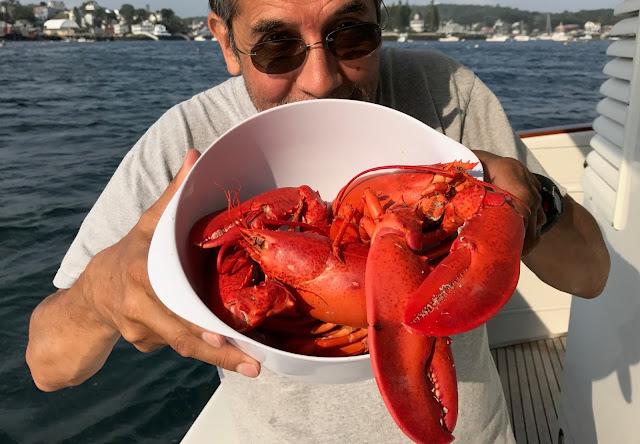 Other activity on the dock reveals that a wedding at a house next to the dock commissioned fireworks as part of the celebration.  Apparently, we will have a front row seat to the show that will blast off at 8:30PM from the island at the head of the cove.  Lobster dinner and fireworks.  No better way to celebrate our arrival in Maine! 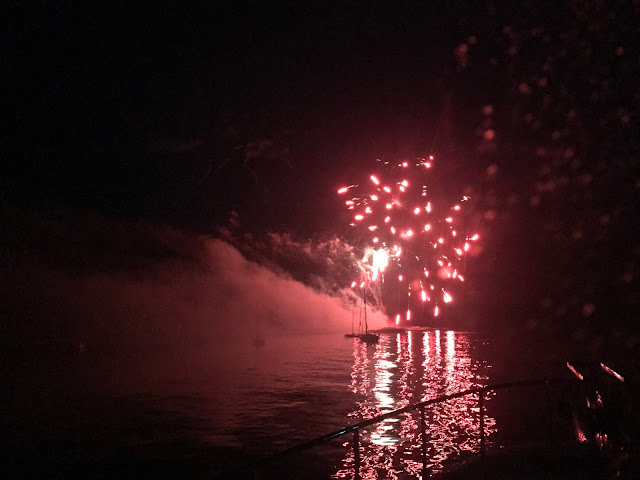 The weather is interesting, to say the least.  Bright sunshine and blue skies change to dense fog… and back to sunshine several times during the day.  Usually in 15 minutes.  Anchored boats become ghost ships in a matter of minutes, and then magically reappear.  Luckily the final transition to clear skies occurs before the 8:30PM fireworks. 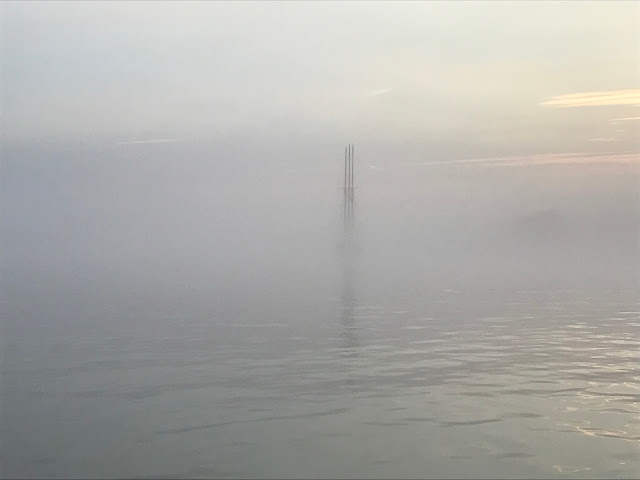 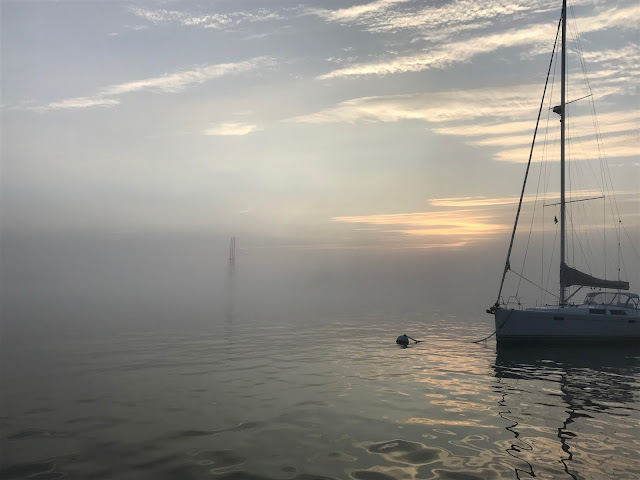 The only sign of a mega-yacht in this part of New England is a gigantic three-masted sailboat anchored at the north end of the cove.  Yes, the masts are so tall that their three anchor lights are red.  Locals say it is a private yacht, 13 crew, British owner, lives in Spain and flew in on his private jet to board the boat…

After three days in Pepperell Cove, the weather window looks like we need to be in a more protected moorage for an incoming storm. So, we get an early start. Fill up with fresh water and fuel and head north to Boothbay Harbor.

Early Sunday morning departure set for 6:30AM.   Uggh!   Welcome to New England.   Solid fog in Newport harbor.   Oh well.   No time like the present to learn how to run in New England "pea soup".   James helps us set up the boat to see and be seen in the fog.   Two radar systems, AIS, fog horn all set to go.   Route entered in the chart plotter. James Knight and Nora working through the fog. This trip will be Newport, Rhode Island to Cuttyhunk, Massachusetts and then on to Vineyard Haven on Martha’s Vineyard.   Except for about 45 minutes of clear sky in Cuttyhunk, the entire 4+ hour trip is in thick fog.   It is a full immersion lesson in playing very close attention to two radar screens (set to different distances) and the chart plotter displaying Bravo’s route as well as other boats with AIS, allowing us to see their position and route relative to Bravo .   Very helpful when you are motoring along at 8 knots, the high-speed ferry is crossing your path at 30
Read more